Amnesty International’s Decoders is a platform for digital volunteers around the world. It enables them to use their computers or phones to help Amnesty researchers sift through large quantities of pictures, information and documents using aspects of crowd-sourcing, micro-tasking, gamification and collaboration.

Thousands of “Decoders”, as they’re affectionately known, complete tasks via web browsers on their mobile devices or computers. A task could include the following:

structures or patterns in data, which can be used by Amnesty researchers to identify possible violations of international human rights or humanitarian law, and make a significant impact both in our analysis and recommendations to actors with influence over events on the ground. The methodology affords us the ability to scale up our human rights research, avoiding literally thousands of hours of individual labour. It has proved invaluable in researching issues as disparate as finding evidence of: civilian infrastructure destroyed by US-led Coalition air strikes in Raqqa, Syria; pollution from oil pipelines in communities in Nigeria’s Niger Delta; and abuse faced by women on Twitter.

In 2015, the Crisis Evidence Lab’s Milena Marin ran a workshop at Mozfest (Mozilla Festival). She presented participants with large, printed satellite images and sticky dots. Her challenge to them was to identify areas of the image containing human presence (huts, dwellings, vehicles) and place a sticky dot on those areas.

The workshop was a great success. 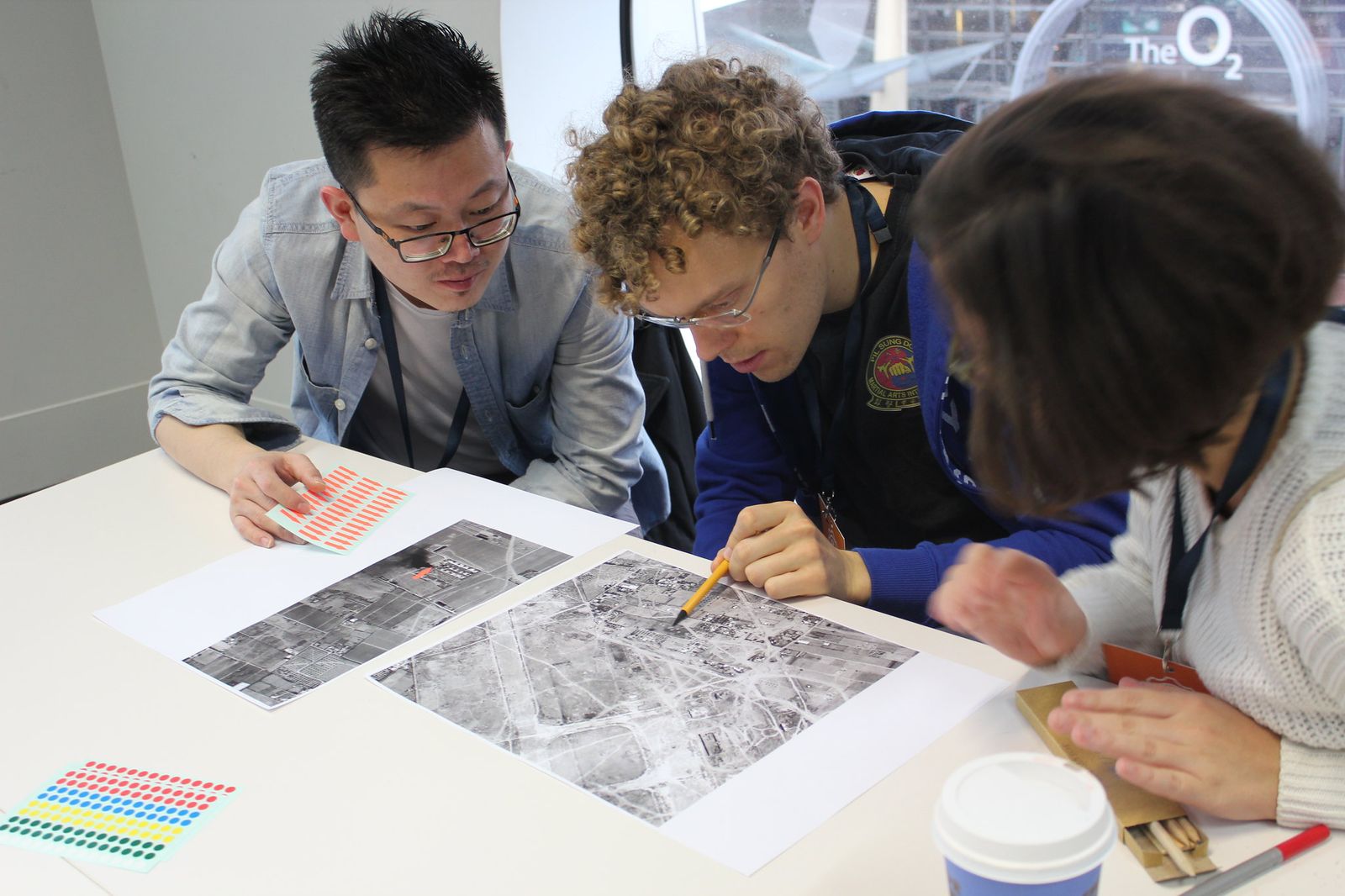 Based on positive feedback from the workshop, we hypothesized that there may be interest in the same type of collaborative micro-tasking process online.

We thought that volunteers would contribute to projects using their desktops, laptops and mobile devices via a website.

Based on positive feedback from the workshop, we hypothesised that there may be interest in the same type of collaborative micro-tasking process online.

Our goals for the Amnesty Decoders platform were to:

We connected with Amnesty researchers and volunteers to gauge interest in the concept of creating an online platform to allow collaborative micro-tasking. The initial feedback was very encouraging.

How We Design Projects

We follow a basic structure when designing Amnesty Decoders projects. We continue to learn with each project, however we have found the following process works well for us.

We start projects by by asking the following questions:

Once we have identified the project goals we are ready to start brainstorming. We run a series of sessions where members of our team roughly sketch ideas for potential interfaces (the interface we will use to display tasks to the Decoders).

Initial sketches for the Amnesty Decoders project “Decode the Difference”

During this workshop we also determine the features required for the project. 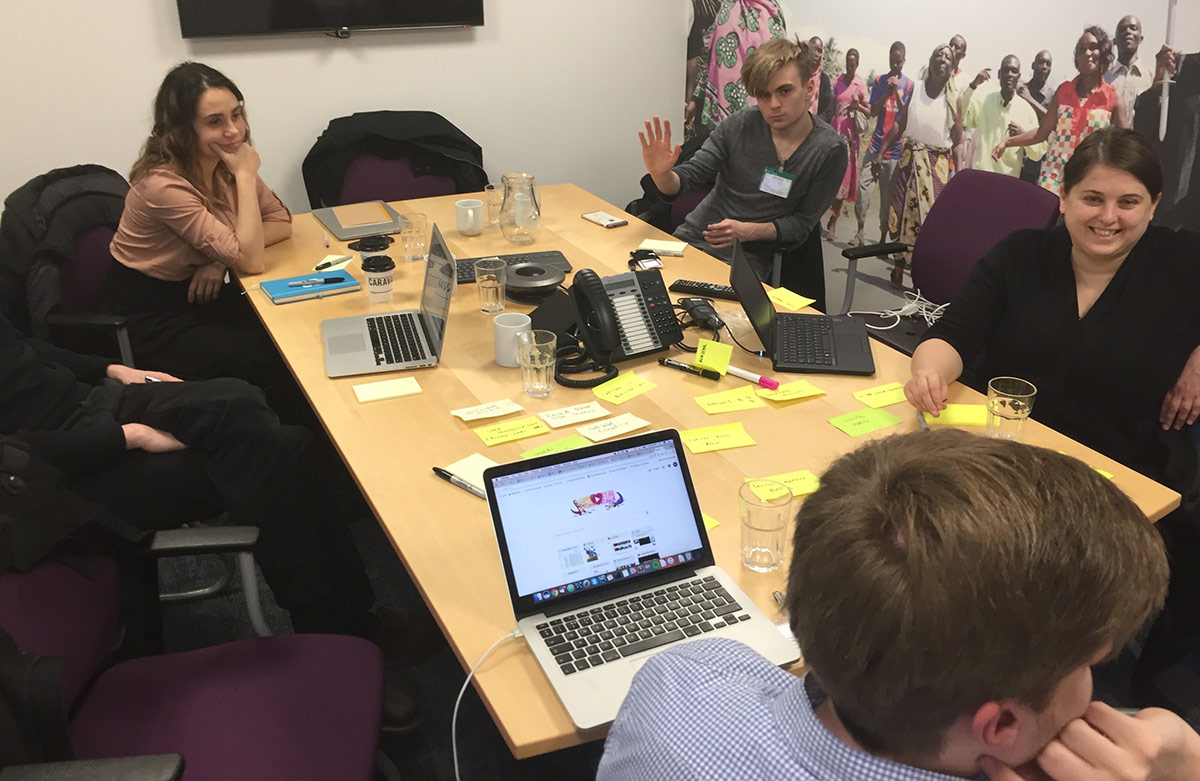 One of our Project Discovery and Envisioning Workshops (pre-COVID)

We also use personas to guide us when brainstorming and designing. Personas are research-based, fictitious characters, which we create to represent users of the Amnesty Decoders platform. They help us understand their needs, behaviours and goals and help to build empathy for them.

Some examples of the personas we use for Amnesty Decoders

We now use Miro as a virtual whiteboard and Zoom when working remotely.

Now that we have a basic sketch and feature list completed, we can start defining the user journey for the project. This allows us to define all the interactivity between various stages of the project website and interface. 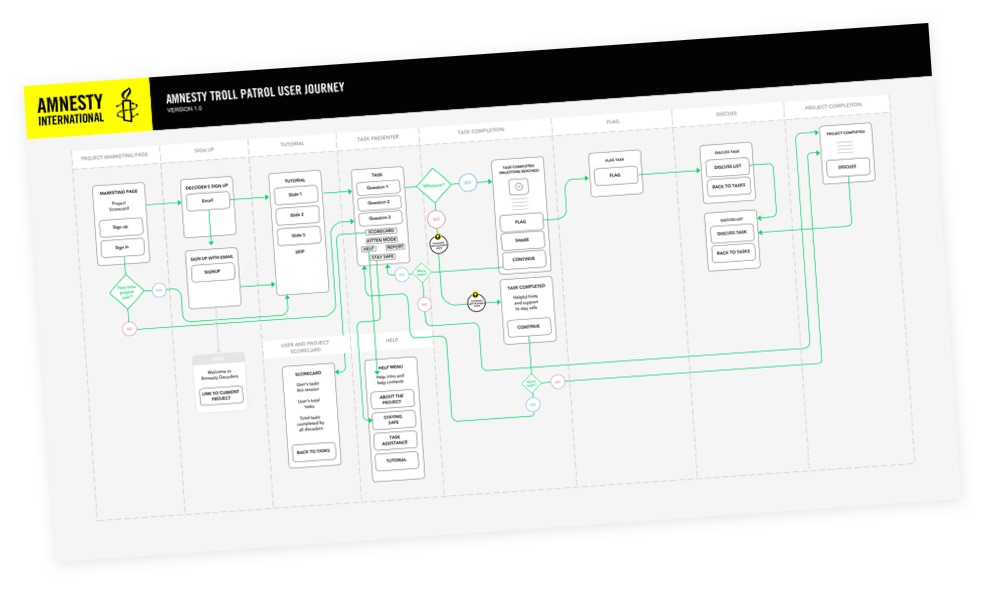 The user journey we created for Amnesty Decoders: Troll Patrol

We then create user stories for the project. User stories are short, simple descriptions of a feature told from the perspective of a user. They typically follow a simple template: as a (type of user), I want (some goal) so that (some reason).

We use the project management application JIRA to keep track of the project’s user stories.

Using our sketches from the Project Discovery and Envisioning Workshop as a guide, we then use Balsamiq to create wireframes for the project. Creating low-fidelity wireframes allows us to quickly mock up interface concepts and see how well our sketched ideas work on screen. At this stage of the design process, we’re not too concerned with the more detailed visual elements of the design, we just want to rapidly try out ideas and see how they work at a basic level. We discuss the wireframes internally and make adjustments as needed before moving on to the next stage.

One of the low-fidelity wireframes we created for Amnesty Decoders: Decode Darfur

By now we have a good idea whether our concept is translating well into an on-screen interface. Now it’s time to get stuck into the visual detail and interactivity between all the stages of the project.

We use the design application Sketch to design the high-fidelity interfaces. We create designs for a range of screen sizes and devices.
After that we use Invision to create clickable prototypes of the project interface. We then share this prototype internally to gain feedback. 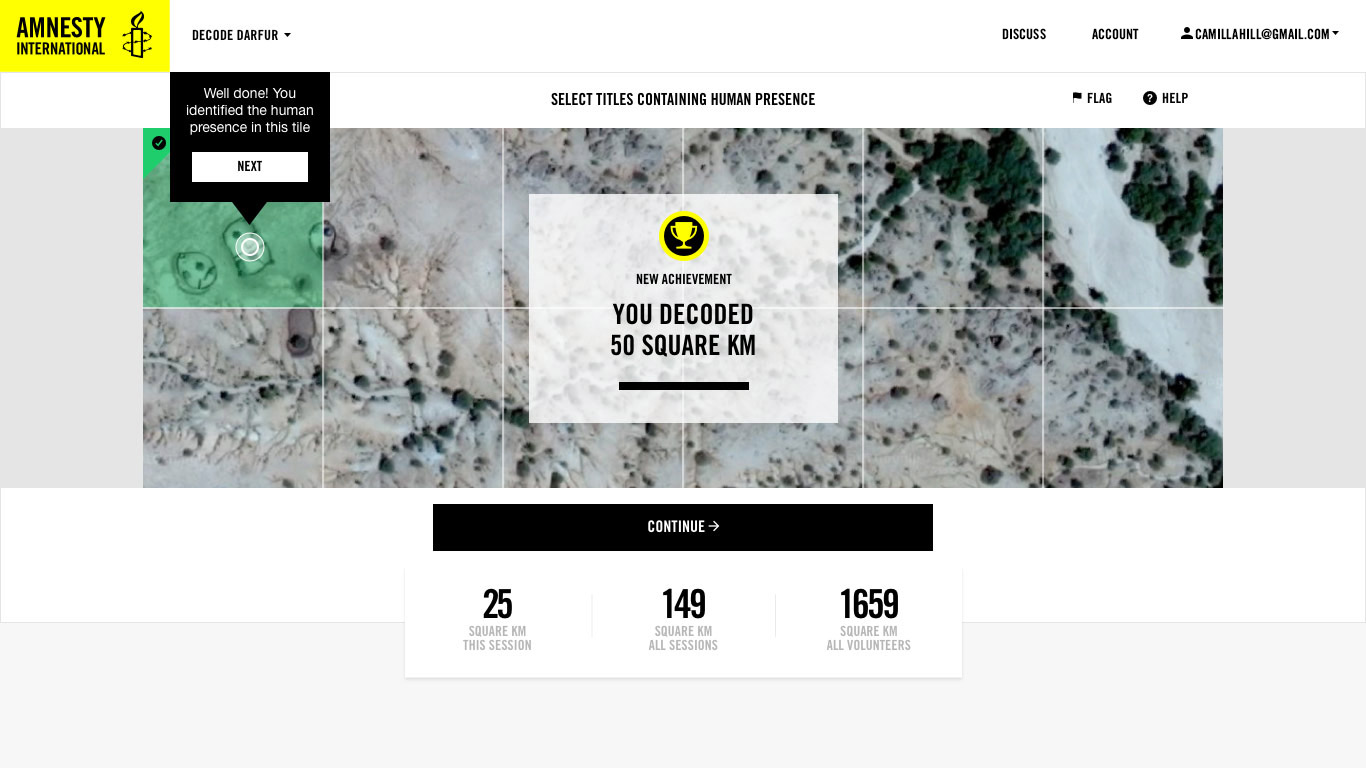 We then user-test the prototypes using Invision with Amnesty researchers and volunteers. This is an incredibly useful stage of the process. There are times when we will test at the wire-framing stage of the project before designing the high-fidelity prototypes. There are often times where we have designed an aspect of the interface that we think is obvious or simple, however it can be missed or misinterpreted by the user during user testing. We try not to lead people through the user testing, but to learn from the user’s behaviour by watching their actions on screen.

Once we have completed the user testing, we incorporate improvements into the design. 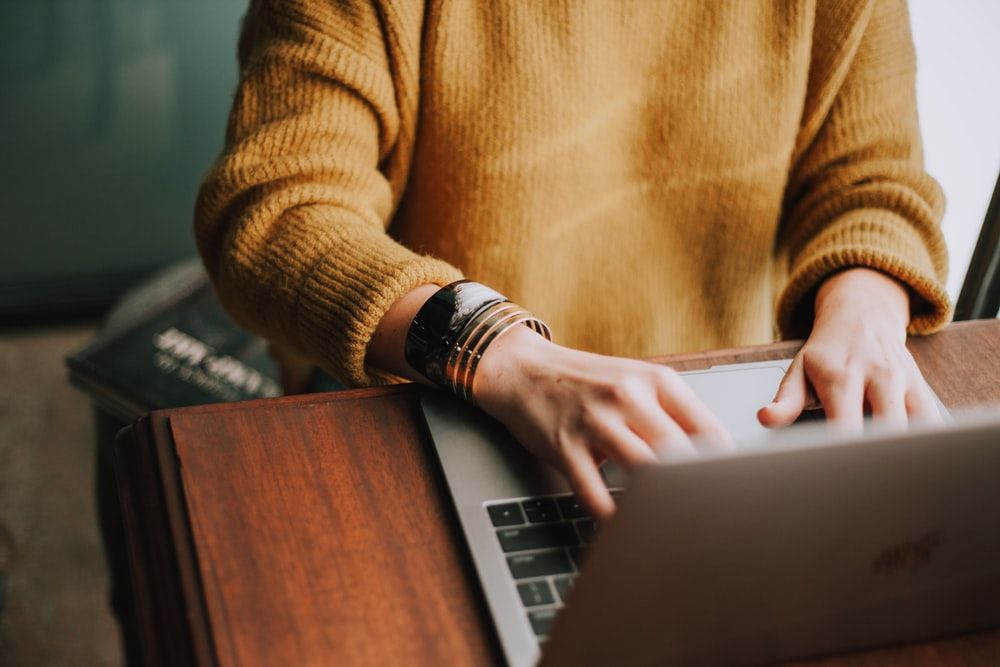 User testing is an important part of the design process (Credit: Unsplash)

We work with a fantastic team of web developers who technically bring the project to life. We develop Amnesty Decoders projects to be used on a variety of devices and platforms and use both physical devices and the excellent testing application, Browserstack to test the projects.

Each Amnesty Decoders project has its own project page, which contains details about the project and links for new visitors to sign up as Decoders. This project page also acts as a launch pad to the project task presenter interface. Once the project has launched we also provide a live update of tasks completed and tasks remaining.

One of the most popular aspects of Amnesty Decoders is the community and collaboration. While decoding (working on tasks), Decoders are able to flag tasks if there is an issue with a task (such as an unclear/obstructed satellite image or hard-to-identify object). When a task is flagged it creates a new post on the Amnesty Decoders discussion forum that runs when a project is live. We use Discourse for the forum.

After the success of the first two Amnesty Decoders projects, we realized we needed help administrating the project forums. We reached out to the Decoders community and were incredibly grateful for the willingness of many Decoders to assist as moderators of the forum.

Once a project has ended and research has been completed we update the project page with project outcomes and actions that have been taken based on research collected. We also report all project results on the Amnesty Decoders results page. 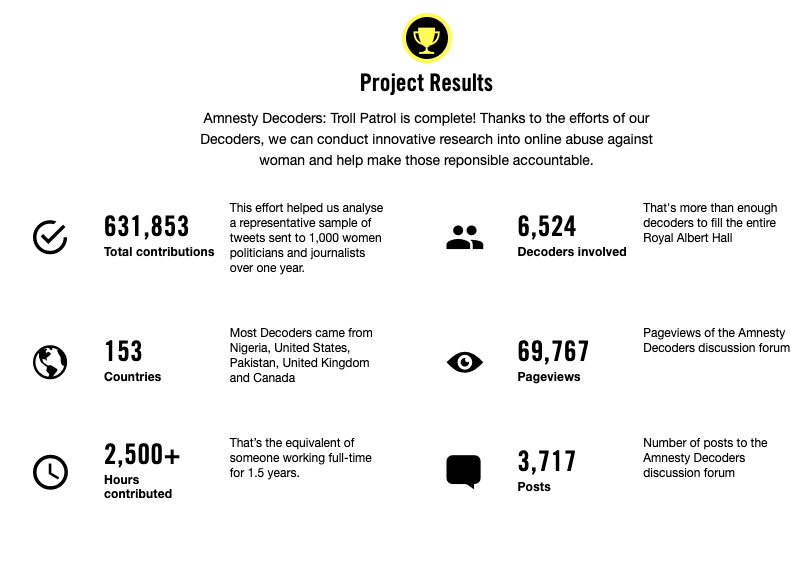 We would like to thank all the volunteers who have helped so far with Amnesty Decoders projects and their passionate, helpful discussion on the forum. Decoders is people power at its best and we truly couldn’t have done it without you. We’d like to extend an extra special shout out to our amazing team of moderators.