Translation affects who can access our published work and who – through the decision to work in certain languages and not others – is included in the research. Yet, the decision to translate and how we handle translation rarely features in project methodologies and, unlike other tools or technologies, its impact can be hard to measure.

The Crisis Evidence Lab teamed up with Amnesty’s Language Resource Centre (LRC) to document how we work together and what makes a successful translation for both the investigator or researcher and the translator. The LRC works across the movement to enhance diversity, inclusion, and human rights impact. It is made up of a multilocation, multicultural, and multilingual team and comprises two main functional areas: translation and interpretation.

Central to our work and informing the decisions we make, are the people closest to and affected by human rights violations. These people become experts, sources, interviewees, and fixers in the production of the research. However, by the end of an investigation, resources are often scarce and there can be pressure to translate only into the languages that are most strategic for advocacy and campaigning purposes. In some cases, to do this excludes our collaborators as well as the people we are speaking on behalf of, such as survivors. For this reason, why and how we translate cannot be separated from questions of access and inclusivity. Put differently, translation is a vehicle for greater local impact and relevance.

Internally, English is the operational language of the Crisis Response Programme (CRP) and its Evidence Lab, but many of our colleagues and collaborators speak other languages. It is also true that most of our investigations focus on groups or regions that are not anglophone. Translation and interpretation can be necessary at any stage of an investigation from the identification, preservation, and analysis of research materials to the report writing and communication of findings. It affects international advocacy, public campaigns, and partnership building with local organizations 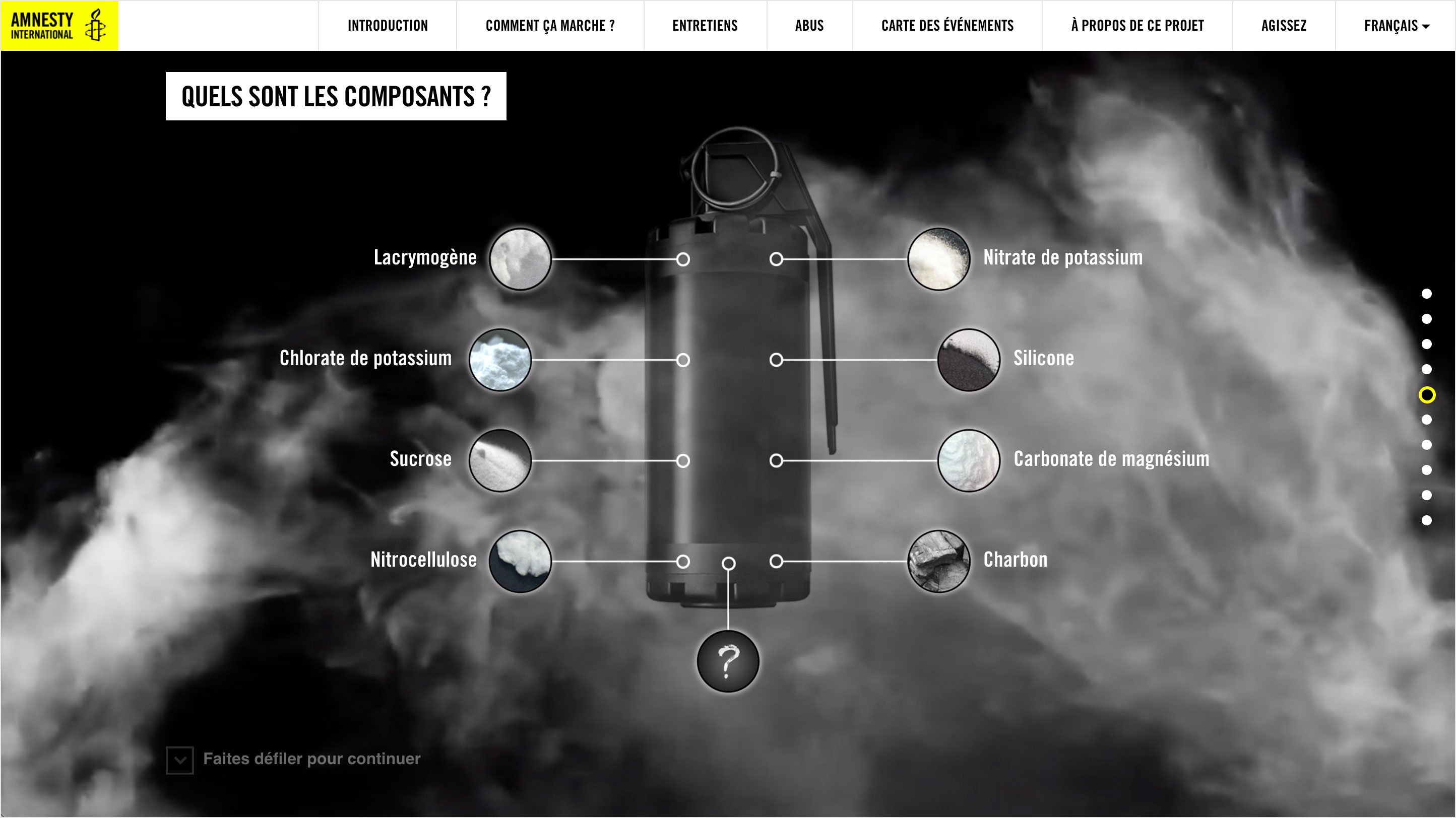 Last year, the CRP, Evidence Lab, and LRC collaborated to translate online resources, maps, and press releases in Arabic, Spanish, Farsi, Portuguese, Somali, and Hausa, amongst other formats and languages.

This year the key findings of a report on the repression of Uyghurs, Kazakhs, and other predominantly Muslim ethnic groups in Xinjiang were translated into 12 languages (Arabic, Bahasa Indonesian, French, Kazakh, Kyrgyz, Russian, Simplified Chinese, Spanish, Tajik, Turkish, Uyghur, and Uzbek). These translations were distributed by Amnesty and our local partners in countries where many of the report’s interviewees, fixers, and interpreters were based. Online and outside Europe, Russian speakers, most located in Kazakhstan, were the largest language group to access the website, therefore underlining the importance of translation.

Nine things we keep in mind

Allocate enough time and resources, from the start
Resources are often scarce by the end of an investigation. When making an investigation plan, leave adequate time for translation, implementation, and quality assurance testing (QA). Involving a translator in the planning process will help ensure that these estimates are realistic.

If you plan to produce multiple language versions of a report or digital product, check that your team has the skills required to do so, or factor in external help. This could include, for example, web developers with experience in developing for Arabic script.

Names can be transliterated in multiple ways, making them hard or even impossible to trace back. This practice has heightened importance when an investigation contains sensitive biographical information such as the names of disappeared or missing people or civilian casualties. 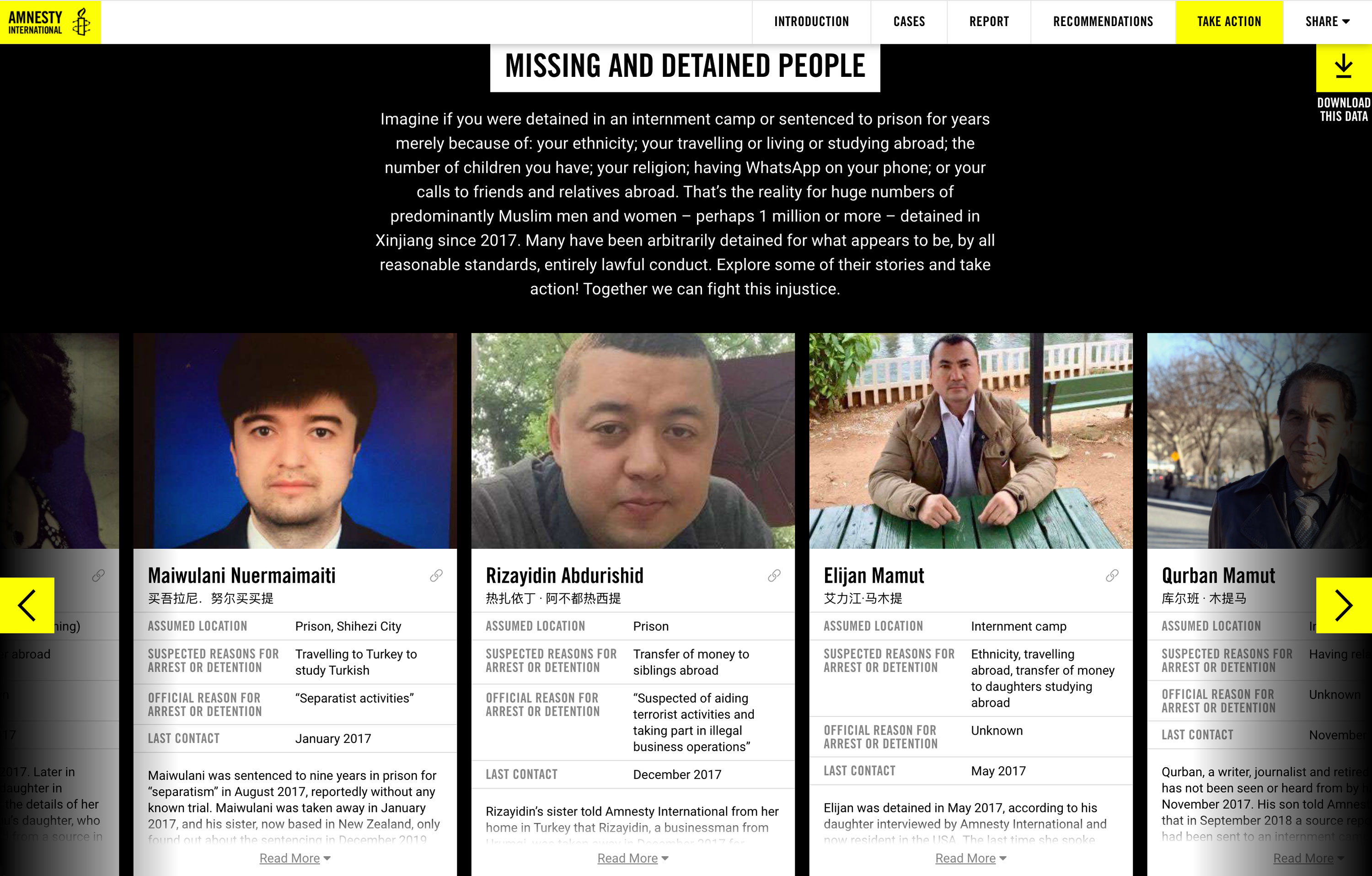 The online report “’Like we were enemies in a war’ China’s mass internment, torture and persecution of Muslims in Xinjiang” showing cases of missing or detained persons. Design: Rectangle. Source: Amnesty International

One spreadsheet is better than many
If working in spreadsheets (e.g. for the translation of digital products such as websites and infographics), one spreadsheet with columns for each language is preferable to having multiple spreadsheets. Storing the data in one location helps prevent inconsistencies from occurring when, for example, one language version is updated but another is not. 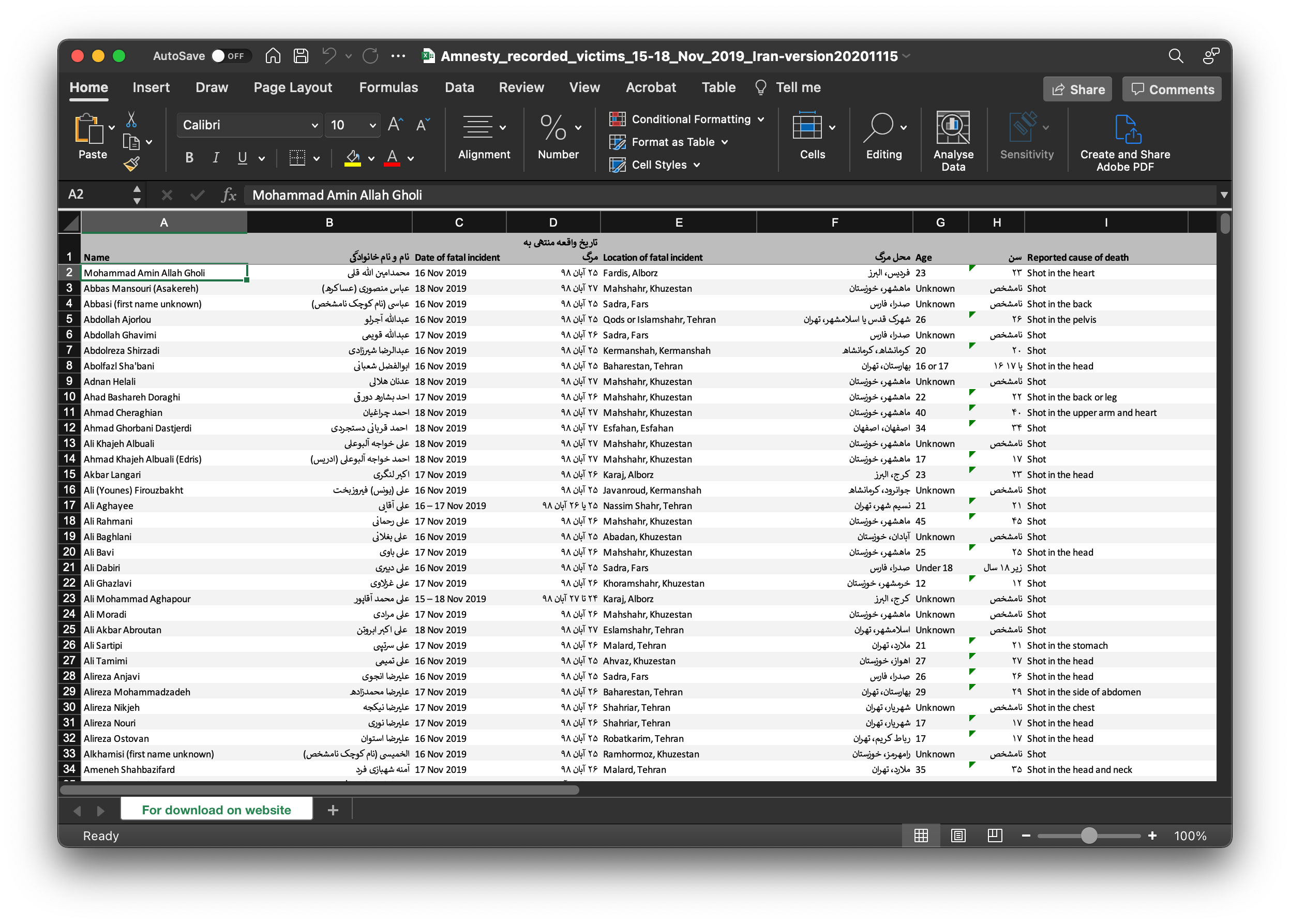 Investigation spreadsheet for the project, “A Web of Impunity”, documenting in Farsi and English the names, last known locations, and biographical details of the 304 people killed by the Iranian security services between 15 and 18 November 2019. Source: Amnesty International

There are known risks to relying on these tools. Slang does not always register in translation software: used for “drone” by some in Arabic, “zenana” (زنانة) means buzzing but translates to “dungeon” in English via Google Translate.

If you need to rely on an algorithmic translation service, at minimum be alert to the likelihood of such inaccuracies.

Glossaries are time-saving tools, too. Translators will spend lots of time researching phrases, names, titles, and background information before starting their translations. A good glossary compiled by the investigator will significantly shorten this process.

It is exactly such a deep understanding of the importance of accurate and consistent terminology which, in the late 90s, led Amnesty’s language teams to an online “term base” for internal use. AI Term — as our term base is known — has seen steady growth since its creation and currently features over 22,000 human rights terms in 10 languages. Its main purpose is to help ensure the consistency and harmonization of key terminology and definitions throughout our entire organization. AI Term is a useful resource for both language professionals and colleagues producing content in multiple languages. 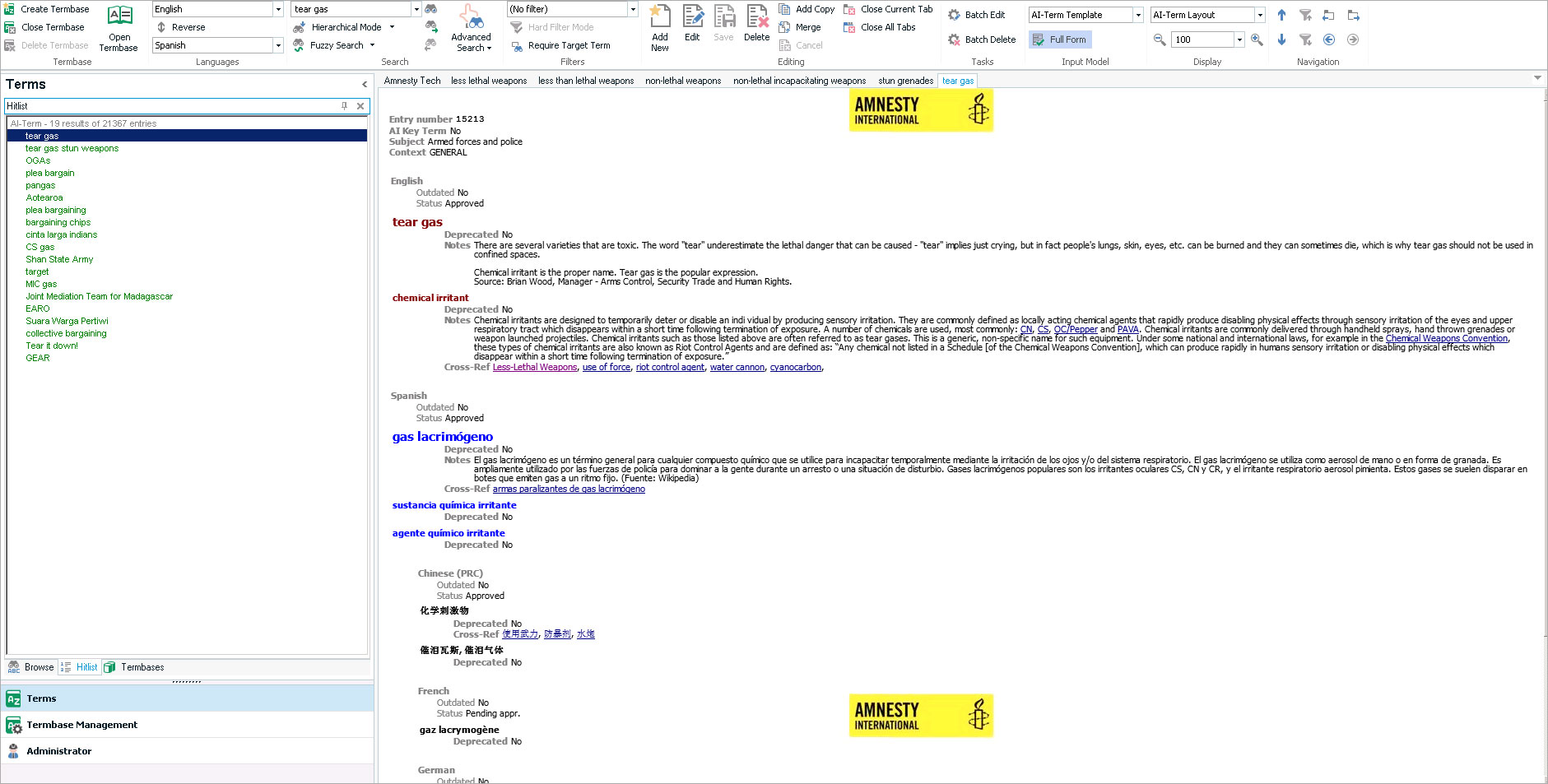 A TM is a database that stores whole sentences, paragraphs or segments of text that have been translated before. They support the localization process, dramatically improving the quality, speed, and efficiency of every translation job.

Know that names of technologies can present a particular challenge
Unfortunately, some languages have fewer terminological resources than others. That’s the case for Arabic vis-à-vis information technology. For example, when translating a text about digital surveillance, it is not easy to find the relevant technical terms in Arabic. The Arabic translation team in Amnesty’s LRC, along with the support of their long-standing translators, have done intensive research throughout the years to introduce such terms to Arab audiences and keep these terms up to date whenever possible.

English and Farsi language versions of an infographic about internet shutdowns, for “A Web of Impunity”. Design: Rectangle. Source: Amnesty International

Provide a visual reference for digital projects such as websites and interactive graphics
Websites and interactive maps have lots of interactive components such as buttons, menu bars, and dropdowns, which are highly contextual. Investigators should provide translators with visual references such as wireframes or prototypes (that show the structure and functions of a website) and prototypes, as early as possible in the design process to help in translation.

Adapt interfaces and user test in the target language
One design does not fit all. When applying a translation to a website and application allocate resources to make adjustments. Through trial and error, the Evidence Lab has learnt to adapt the user interfaces and graphics it creates to work with target languages. Adaptions can be as obvious as flipping a left-to-right interface to right-to-left, or as subtle as increasing the size of buttons to allow for longer line lengths or merging text blocks to accommodate a different structure.

Farsi and English language interfaces for “A Web of Impunity”. Source: Amnesty International

In general, when the localization process is from the Latin script to a more detailed script, such Farsi, the type sizes and line heights should be increased. User testing in the target language is key to ensuring that readability and functionality are consistently high across language versions.

Leave time, too, to fix technical glitches such as characters not displaying correctly in a target language script.

A comic strip created for “Ban the Scan” that was made available in Arabic, English, French, and Spanish. Artwork: Eliana Rodgers. Source: Amnesty International